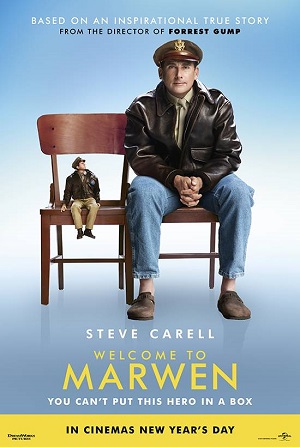 The victim of a brutal attack finds a unique and beautiful therapeutic outlet to help him through his recovery process.

In 2000, Mark Hogancamp was nearly beaten to death by five men outside a bar. Left with brain damage and little money to afford therapy, Hogancamp began creating miniature doll versions of himself, his friends, and his attackers as a way to cope, eventually creating the town of Marwen, set his new 'friends' as characters during World War II.

With Zemeckis's groundbreaking animation work the director knew that this could be the way into realising Hogancamp's story for the screen.

Steve Carell was intrigued to learn more from Zemeckis as to the approach he would take to bring the events to the screen before signing on to star as Hogancamp.

"We got together and he explained what his vision was, which was essentially to take this world that Mark had created, this miniature world, and bring it to life with motion capture,” Carell said. “That felt like a really fun and interesting way in, to be able to really even see more of Mark Hogancamp’s imagination coming to life.”

Carell is a huge fan of the legendary Zemeckis, calling him "a legend. No way around it. His body of work, there are few people who you can say I not only grew up with his films but they really impacted me in so many ways and formed how I look at film and informed the kinds of things I would want to do. So many things have been said about him. He’s a master.”

Zemeckis is equally a fan of Carell's work saying "He's such a great comedic actor. You know, he’s such a magnificent dramatic actor. So he fit the film perfectly because I knew he could do the Hogie doll, his alter ego with all that fun and swagger. And then I know he can do the emotional and the fractured character in the real world."

Our industry does tend to throw round terms such as legend a little too liberally but when it comes to Zemeckis he is certainly up with the greats, with so many box-office hits, including: Romancing the Stone (1984), Back to the Future: Parts I, II, III (1985, 1989, 1990), Who Framed Roger Rabbit (1988), The Polar Express (2004) and Flight (2012). And now with the blending of the emotions of his film Cast Away (2000) and the stunning animated feats of A Christmas Carol (2009), Welcome to Marwen is a film that our friends at Universal are rightly excited about, and we echo their sentiments.

Welcome To Marwen is out now!