A woman seeks revenge against those who orchestrated a plane crash that killed her family.

The Rhythm Section is an international spy thriller that follows the story of Stephanie Patrick, an ordinary woman who finds herself in extraordinary circumstances. She has been brought low by heartbreak, guilt and shame in the wake of her family's death in an air crash and has embarked on a path to self-destruction.

When she discovers that the plane was destroyed in a terrorist attack, she is drawn into a murky, complex world. As she learns more about who killed her family, and why, she embarks on a mission to track down those responsible, assuming the identity of an assassin as she rediscovers her own life, while protecting the lives of others. 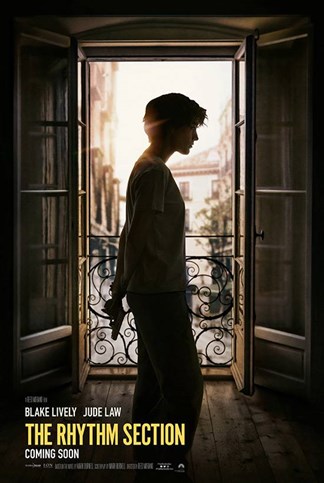 Staring as Stephanie Patrick is Blake Lively (The Town (2010), The Age Adaline (2015), A Simple Favour 2018)) and she is almost unrecognisable in the trailer - which has been one of our favourite recent trailers, just crammed full of great action – and really throws herself into the role as the woman seeking revenge. Such was her dedication that she injured herself when filming a stunt, which saw the production closed down for a period while she recuperated.

The Rhythm Section is produced by Bond producers, Barbara Broccoli and Michael G. Wilson, and directed by cinematographer-turned-filmmaker Reed Morano (I Think We’re Alone Now (2018), The Handmaid’s Tale), making her major Hollywood studio debut, from a script by the author of the Stephanie Patrick novels, Mark Burnell.

Recently the director spoke of what attracted her to The Rhythm Section:

“The writer Mark Burnell wrote the script that I read originally and he just laid the groundwork for what I could tell could be a very interesting psychological point of view movie about a woman. And he did a really amazing job and what he had already written made my imagination go wild. It wasn’t like it was all right there on the page, but the visual I got from his writing, and the potential of what it could be was very clear, so it was very exciting for me. It gave me the same feeling that I had when I first read the pilot for The Handmaid’s Tale where I thought, I know exactly how to do this.”

And on Blake Lively pitching for the role of Stephanie Patrick:

“Blake didn’t come after the role specifically, but she came to me to direct her in something. She found out I wanted to do [The Rhythm Section], and then planted that seed: maybe we do it together? And I thought, that’s a good idea. You just get a feeling … Blake said, “Let’s do it, and I’m a big girl, if you don’t want to do it with me, then I’ll go away.” But there’s something about the actresses out there that know what they want. Those are hungry actresses; those are hungry actors, that means they’ll do whatever it takes to deliver something.”

The Rhythm Section opens at Showcase Cinemas on January 31