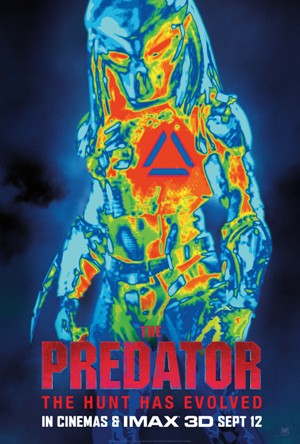 From the outer reaches of space to the to the backwoods of southern Georgia, the hunt comes home in the explosive reinvention of the Predator series. Now, the universe’s most lethal hunters are stronger, smarter and deadlier than ever before. And only a ragtag crew of ex-soldiers and an evolutionary biology professor can prevent the end of the human race.

“I completely blew it off. I was kind of – what’s the word? – a jerk, actually. But all in good fun.  I didn’t think they needed a rewrite.”

On his team to beat the Predator

"They’re the forgotten soldiers, misfits. They’re all broken. For one reason or another, they were all deemed untrustworthy and unacceptable because they got fractured, something broke. But somehow, they found each other. They aren’t a crack team of soldiers. It takes these guys a bit of effort to be good, but there’s still a spark waiting to be ignited. There’s an unquenchable spirit that is flickering, and this is their opportunity to come to life and support each other and go up against the monster. They are the least likely people you would ever choose for this, except that they’re really tough when the chips are down. They have spirit, they have spunk, and they have an unquenchable loyalty to each other.” 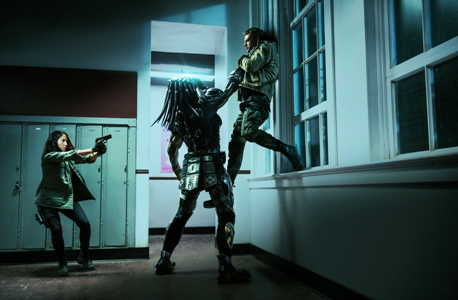 I’ve never seen a group of actors like this that would get together after work, go out to eat. They hung out in a little tent, just sitting around talking to each other. There wasn’t a lot of going back to your trailer in this movie. People liked each other, they wanted to spend time, stick around on set, and just hang out with the other guys. It was pretty unusual. Everyone just took to each other.  Boyd was a big part of that, a catalyst for the kind of camaraderie and that kind of sensitive macho.  Boyd plays the spiritual father of these guys, the sane member of the group, if such a thing exists in the movie.”

On the look of the Predator

"It’s special because there’s a mask that’s freaking cool, and then you take off the mask and it’s even cooler. It’s a creature that we recognise, that walks like us, understands us, has the same kinds of primitive impulses as a human being but it’s clearly not from here. The ability of a guy to look at the Predator in the face and actually relate to it is what’s interesting. I think it has the capability of being an actual character.” 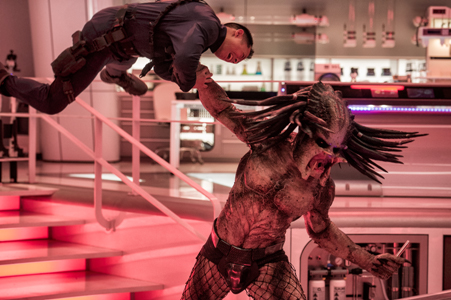 ​“I think it’s always important to find the coolest variant without violating the basic principal that made the first one popular. I didn’t want to go too far because I want it to be nostalgic for the first movie. What was so great about the original Predator was that human quality which, as deadly as it was, it wasn’t just a wild animal, it had an intelligence and a cunning and it could look at you and see what you’re afraid of and see how to stop and catch you.”

​"We wanted to do a seamless meld of special and visual effects. Taking the Predator to the next level of deadliness required a degree of CG, in the best way.” 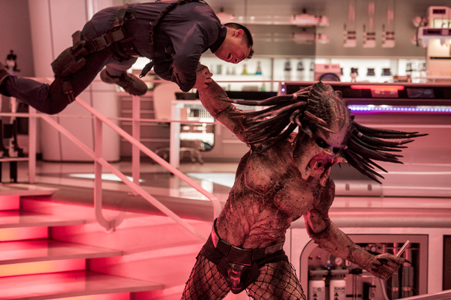 On the deadly but fair Predator

"While never forgetting realism, or that we had an R rating. So heads come off. These Predators slice and dice, as well. We had free rein to make a real, old school adventure film that sums up for us all the genre tropes that we’ve grown to love, but make it bigger. It’s a very complex and tasty stew, it’s not simple. It’s not chicken noodle soup. It’s like a bouillabaisse.”

​“A Predator can take out the side of a mountain, yet they always seem to want to play fair. They always want to find an opponent worthy of their skill, because otherwise, they can leap, they can jump, they climb trees, they can become invisible, they have a cloaking mechanism which allows them the perfect camouflage of blending into any environment. You never know they’re there until you see the wall and it seems like it’s a little bit alive, or the tree that seems like it’s moving – then they’re on you. They are perfect ninjas in a way, with their weapons, skills and physical ability. They have to find someone worthy and they seek out the most devastatingly powerful opponents.” 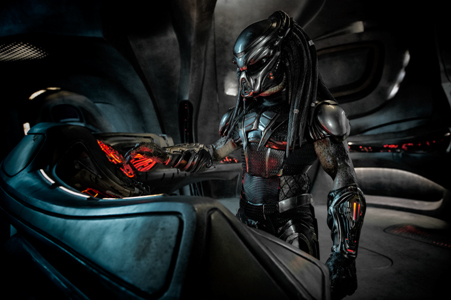 The original Predator film was originally going to be called “Hunter.”

Shane Black appeared in Predator as Hawkins, who is the first main character killed by the Predator.

The Predator was filmed 30 years after the first Predator film was released in 1987.

The Predator acknowledges the previous movies exist. In reference to Robert Rodriquez’s Predators, one of the characters in The Predator says there’s talk that Predators have abducted people for sport and taken them somewhere.

The exterior Stargazer action scenes were filmed at the Lulu Island Wastewater Treatment facility in Richmond, British Columbia. Wastewater is another word for sewage – when the wind blew in some directions, it stank on set!