Brian Cox on Returning to the Super Trooper Family 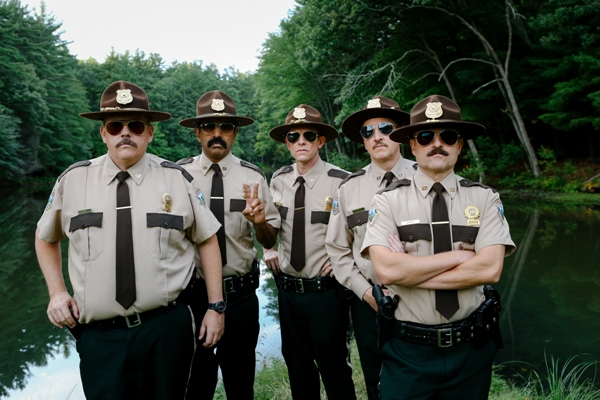 Everyone's favourite law enforcement team is back by popular demand with the long anticipated follow up to the cult comedy classic… Super Troopers. When an international border dispute arises between the U.S. and Canada, the Super Troopers- Mac, Thorny, Foster, Rabbit and Farva, are called in to set up a new Highway Patrol station in the disputed area. Unconventional police work follows, and the result is… Super Troopers 2.

Filmed on a shoestring budget, Super Troopers played the Sundance Film Festival where it was acquired by Fox Searchlight and went on to bring in $23 million worldwide in its theatrical release. In the years that followed, the film gained a devout fan base and about three years ago, Chandrasekhar, Kevin Heffernan, Erik Stolhanske, Paul Soter and Steve Lemme began brainstorming new misadventures for their Super Troopers characters.

The writer-performers were inspired by an NPR radio report about U.S.-Canada border disputes. “We heard on the radio that the government tried to confirm that the stone markers, which delineated the U.S. from Canada, were where they thought they were, and in some cases, there were discrepancies,” Chandrasekhar recalls. “We were amused by this idea: imagine if somebody went back and discovered that the border is not where the border should be? You’ve got all these people who were proudly Canadian who were now being told they have to become American. We felt like that was a fantastic conceit for our film.

The acclaimed British actor is famed for among other performances his memorable role in The Bourne Identity and earned plaudits for his title performance in the Royal National Theatre production of 'King Lear'. But for all his achievements, Cox says it’s his performance as world-weary Captain Hagan that has earned him the most recognition from strangers on the street.

"About four years after Super Troopers came out, I was eating in a restaurant in Austin when all these University of Texas students came over to my table and started quoting the film,” Cox says. “Literally, the whole film! I couldn’t remember any of it. But they told me what my lines were, and I said, ‘Well if you say so.’”

Although comedy fans adored Super Troopers, some critics disagreed, Cox recalls. “When Super Troopers first came out, I got the worst reviews of my career,” he laughs. “I remember one of them said, ‘If Mr. Cox needed the money, surely someone could’ve lent it to him.’

"Despite the critics, I survived it reasonably well and went on to do other things, but at the time, being in Super Troopers looked like it might be a great impediment to my career.” Despite that, Cox regards his Super Troopers character with immense empathy. “The Captain is a sweet, rather sad character because he’s lumbered with these five idiots,” says the actor. “I think the audience should have immense sympathy for my character but instead they just laugh their heads off.”

While Super Troopers featured a fake bear sequence, for the sequel the filmmakers upped the ante by hiring an actual 1,300-pound bear named Whopper to terrorise Heffernan’s character, Farva. “The bear was a real diva,” jokes Lemme.

“There was a great moment when I worked with the proper sort of actor, who happened to be a bear who hit his marks,” says Brian Cox. “The bear did what he was told, and was excellent. And we filmed it quicker than any other scene. This bear came in, did this stuff, got out, he was fantastic.”

Filmed in Massachusetts in August and September 2016 Super Troopers 2 challenged cast members to bring their slapstick A -games. “I can only describe the mood as contrived chaos,” Cox says. “You learn to ride with it.”

The veteran thespian says he’s already looking forward to his fantasy of what a Super Troopers 3 might look like. “I’ve played King Lear and I’ve played Titus Andronicus,” Cox says. “I’ve done all these major roles up the wazoo, but I always wanted to be Jerry Lewis because, you see, I’m a closet comedian. Hopefully, if there’s a Super Troopers 3 Captain O’Hagan will be able to exact his revenge. That’s what I’m looking forward to: No night shoots…and exacting my revenge."