During an adventure into a dark criminal underworld, Han Solo meets his future copilot Chewbacca and encounters Lando Clarissian, years before the rebellion. Okay with Solo: A Star Wars Story released at Showcase later in this month, here is what else we know (forewarning: what we THINK we know!) about the Han Solo prequel.

It would appear that Solo is the first of three outings as the space smuggler for Alden Ehrenreich after he let slip he had signed on the dotted line for a total of three Solo movies.

Emilia Clarke believes that is her character’s (Qi'ra) journey is "definitely one of survival and strength. The way I feel about her was yeah this girl has got a core of steel. Whilst it is Han Solo's movie, this girl gets to be badass. And strong."

Qi'ra and Han grew up as kids together, so while they're friends Clarke has also hinted of a romantic side.

Chewie joins the adventure as Han's trusty sidekick. Joonas Suctamo is reprising the role of Chewie, which he has played since The Force Awakens back in 2015.

The internet went into meltdown with the introduction of Lando Clarissian at his rapscallion best played by Donald Glover, and the cry for a Lando Clarissian standalone movie reached fever pitch! 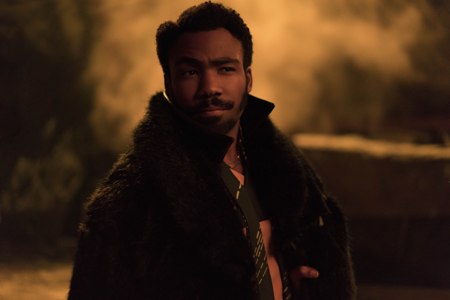 Every space smuggler needs a mentor and Han is no different, albeit his mentor is of the shadier variety, in the shape of Woody Harrelson's criminal, Tobias Beckett.

Thandie Newton is 'Val', part of Beckett's gang, and had this to say of her character:

"I’m the first woman of colour to have a prominent role in the Star Wars legacy. There have been others with one line and Lupita Nyong’o was a computer-generated character (in The Force Awakens and The Last Jedi), but you didn’t get to see the colour of her skin. I’m the first. I’m going to have a toy and everything. It’s exciting, but that’s all I can say. It is a big deal.”

So what of the villains in Solo: A Star Wars Story? Well we have Paul Bettany's Dryden Vos, but for the true dark side it would appear we look to Enfys Nest, which if rumour is to be believed takes the form of a female villain, the leader of her own group of space bandits: the Cloud-Riders.

There have been rumours of a troubled production, but the same could be said of the first standalone Star Wars story Rogue One and for many it is the finest Star Wars film since the original three outings. So we have huge faith in Kathleen Kennedy, Ron Howard and the Star Wars team.  And it is worth remembering that if there is one person who can escape from any tricky situation it is the indomitable Han Solo.

In Han we trust!