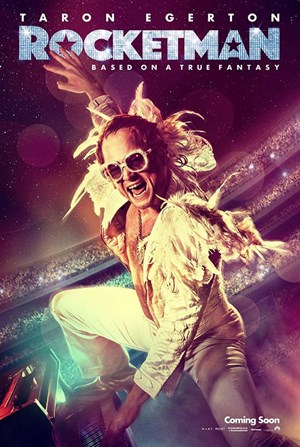 With the release of the Elton John bio-pic Rocketman, Showcase caught up with actor Jamie Bell, who plays Bernie Taupin, to learn a little more about Elton John’s lyricist and friend.

Showcase: Great to meet you Jamie

Showcase: It would appear that Bernie Taupin has the ideal job…he writes the lyrics to some of the most popular songs ever recorded and then enjoys his anonymity while Elton John has all the burden of fame; what did you learn about the elusive lyricist during your research?

Jamie Bell: Yes, certainly as you say that he enjoys his anonymity and that he likes to keep out of the limelight. But there was also in the beginning a desperate need to get out. Right before he met Elton he was a little bit directionless, he was working on a chicken farm, he was scraping dead chickens off the ground and throwing them into an incinerator and I think there was a feeling ‘What am I going to do with my life?’

Like his mother and his grandfather he too had a great affection for the great works of literature, he loved poetry and he was very much a guy with his head in the clouds and I think his lyrics really mirror that; they’re very imaginative and evocative of almost another world, a fantasy world.

He became Elton’s voice and gave him the language and the prose that Elton just couldn’t quite emote.

Showcase: You make mention of Taupin’s love of the written word. Was it always the case that he was going to centre on writing lyrics?

Jamie Bell: He wrote poetry, he actually did a spoken poetry album, which I have on vinyl; it’s supported by Elton’s band. He’s done all sorts. He had a solo album on which he is singing. He has accomplished many, many things.

Showcase: So more than one string to his bow then?

Jamie Bell: Oh, for sure, for sure!

Showcase: Do you know if he has seen your portrayal yet?

Jamie Bell: No, no not yet.  I think we are waiting for the big reveal!

Showcase: Wow, what is that feeling like as an actor playing a living person and then waiting for his feedback?

Jamie Bell: Horrible, just horrible. You’re waiting for the film to be released and you obviously want the film to be received well but I think for me and Taron there are only two reviews that really matter: Elton and Bernie’s of course.

Showcase: The footage we have seen clearly shows the rapport between you and Taron, had you met prior to being offered the film and how did your relationship develop on set? 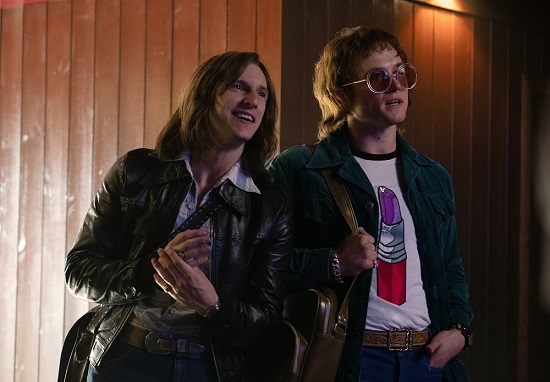 Jamie Bell: We had only met really once before and then when this came around we did a little rehearsing and hanging out together, but not much. We did rehearse that first meeting actually. But we both kinda knew what this relationship was, we had both done our research and we knew how integral each of them is to the other, and the journey we were going to go on together.

Showcase: You can really see your relationship blossoming.

Jamie Bell: Thanks. We do get on well. We hang out off set. In fact while we were filming we lived very close to each other so I would nip over to his apartment. We would talk over scenes but mainly just shooting the breeze and taking the opportunity to get to know one and other. Taron had far more on his plate shooting the film than I did and I just wanted to be supportive of him during the process.

Showcase: With Bernie you had more of a blank canvas because we do not know too much about him. Is that beneficial or not to you as an actor?

Jamie Bell: Well I didn’t have the pressure that Taron has. I certainly didn’t go into the process thinking ‘Everyone knows he has that certain walk or what he sounds like’ or indeed what he looks like. So take it from me it’s a lot easier a prospect, unlike Taron because we are talking about one of the most recognisable men in the world in Elton John. But you can fall into a trap whereby you end up doing an impersonation or end up mimicking, but actually what he has done is embody the spirit and soul of him and that really comes through.

Showcase: You speak about an easier prospect but how easy was it to know that you’ll be singing for the first time on screen?

Jamie Bell: It was quite daunting actually because I am not known for my singing at all. I had actually sung as a kid, I was in the National Youth Musical Theatre and I had done pantomimes where I had been part of the chorus but this was kinda nerve-wracking to be honest. We actually recorded everything at the famous Abbey Road Studios, which only added to the nerves. I mean you’re standing there thinking ‘Jeez, here we go!’ But like much of my career I kinda winged it and flabbed my way through it.

Showcase: During our preview there was a sharp kind of intake, ‘Oh, Jamie is going to sing!’

Showcase: You nailed it!

Rocketman is now at Showcase