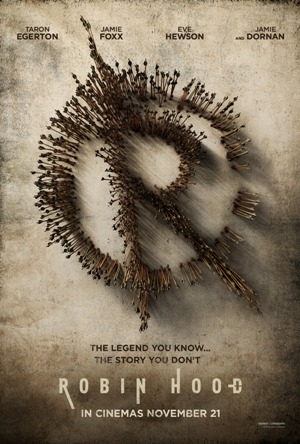 Robin of Loxley, a war-hardened Crusader and his Moorish commander, mount an audacious revolt against the corrupt English crown after arriving home to discover a Sherwood Forest rife with corruption and evil. Teaming with a band of outlaws, he takes matters into his own hands to set things right, with very little merry-making along the way.

We are certainly looking forward to the new Robin Hood film to be released later this year by Lionsgate. The action packed trailer and images show a darker take on the legend of Robin and his merry men. Billed as 'a thrilling action-adventure packed with gritty battlefield exploits, mind-blowing fight choreography, and a timeless romance' it is sure to pack a punch with a cast led by Taron Egerton (Kingsman: The Secret Service) as the title hero, Robin Hood, Oscar winner Jamie Foxx (Ray and Django Unchained) as Little John, Jamie Dornan (Fifty Shades) is Will Scarlett, Eve Hewson (Bridge of Spies) is playing Maid Marian and the Sheriff of Nottingham is played by Ben Mendelsohn (Rogue One: A Star Wars Story).

Helming Robin Hood is BAFTA winner Otto Bathurst who won acclaim for directing the gritty TV drama, Peaky Blinders. Speaking at the press conference at the start of the film's production in Croatia, Bathurst had this to say about his version of Robin Hood and the outlaw's relevance to today.

“To be honest, when this film was first offered to me, I turn it down immediately. But when I started to look into it and investigate this man and legend, the story seemed more relevant today than it has ever been. For me, making a film is about reflecting what’s going on at the moment, to bring back something to humanity, to society. So there is a purpose to the film rather than being pure entertainment. We want to be entertained as well. Every day the film seems to be more and more important. This will be a great peace of entertainment, but there is also a real subtext to the movie about government, corruption and the power of the individual to bring change to society. It’s about 99% being ruled by 1% and if any of us, any normal man has the strength and the courage to stand up and fight for the truth, then the real change can happen. That is the strong message of Robin Hood and it’s going to be an even stronger message of my Robin Hood.” 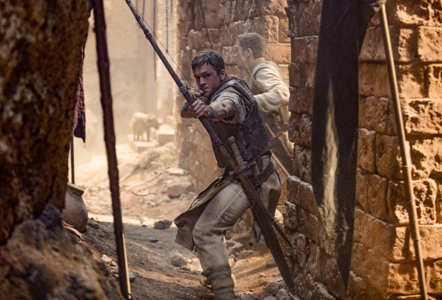 Certainly Bathurst's new take on the on the mythical giver to the poor convinced star Taron Egerton who "was approached not long after the first Kingsman movie had come out, and my initial response, to be totally honest, was ‘Why?’ But Director Otto Bathurst told me he wanted to do something entirely revisionist, something that can’t be tied down to a medieval universe."

Bathurst directs from a screenplay by Ben Chandler and producing the film is Leonardo DiCaprio. We hope to have more news on Robin Hood soon.

Robin Hood is at Showcase now!