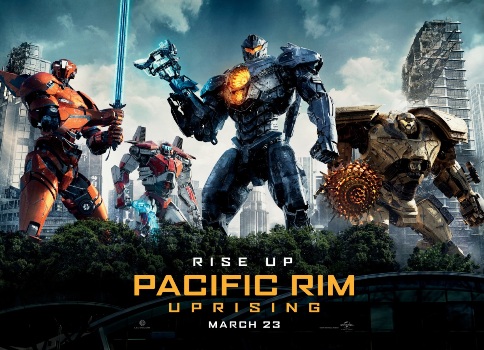 Jake Pentecost, son of Stacker Pentecost, reunites with Mako Mori to lead a new generation of Jaeger pilots, including rival Lambert and 15-year-old hacker Amara, against a new Kaiju threat.

It is the year 2035, 10 years after the events of the first film, in which humanity supposedly defeated the threat of the Kaiju. The war is over. The Breach, the gateway beneath the Pacific Ocean that spawned the Kaiju, has been closed, but the fear that these unrelenting beasts from another dimension may somehow rise again is ever present.

On hand to direct the sequel is Steven S. DeKnight from the hit series ‘Daredevil’ and overseeing the production as producer is director of Pacific Rim and the newly crowned Oscar winner, Guillermo del Toro.

With production greenlit, one of the next vital questions to answer was who would play the lead role of Jake, wayward son of the legendary war hero Stacker Pentecost? For DeKnight and the film’s producers, one actor immediately rose to the top of the list: John Boyega.

Pacific Rim had made a big impression on Boyega, in the days before he broke out as a star. “Seeing Idris Elba in the first film was very important to me. At the time I was involved in acting on a small scale in drama clubs, and in 2013 I saw a print ad while I was on the bus—Idris Elba as Stacker in an all-black Jaeger suit. The image, and what it represented, immediately struck me and motivated me.”

His director couldn’t have been more excited at the choice: “I was thrilled when I found out that John was interested. I met with him, and we were both very excited about the possibilities of what we could do with the franchise. He’s a classic hero, but can play the hero and the anti-hero at the same time. Jake Pentecost starts out as a thief and ends up saving the world. John has all the qualities you would want for that type of role; he’s charming, smart and funny. He brings a real Harrison Ford as Indiana Jones quality to the character.”

That inspirational reaction the young Boyega had, on seeing Elba in the Pacific Rim poster a few years earlier, would be key to the overall impact the film sets out to have on its audience.

“Ultimately, the film is about people coming together to fight for a common good” shares DeKnight. “It doesn’t matter where you came from - everybody has a chance to make a difference. Everybody has a chance to be a hero. That was a message that strongly spoke to all of us working on this movie, and we wanted to convey that to the younger audience.”

Pacific Rim Uprising is certainly a global film, taking the audience from the slums of a future Los Angeles, to China, Tokyo, Australia and deep into the icy reaches of Siberia. With multi-generational and multi-cultural appeal, this is an emotionally charged, visually spectacular film about the battle for our planet and inspiring human heroism on a whole new scale.