Knives Out: An Update!

We promised you an update with regard to Rian Johnson’s eagerly anticipated Knives Out and lo and behold we have some clues (!) to some of the (un)usual suspects in the sights of Daniel Craig’s detective Benoit Blanc.

Suspected of the gruesome murder of Harlan Thrombey, played by Oscar winner Christopher Plummer, are:

Linda Drysdale, née Thrombey, Harlan's eldest daughter, is a chip off the old block. A driven, self-made businesswoman, she shares much in common with her deceased father. And she immediately, and perhaps suspiciously, resists Blanc’s sudden intrusion into their family’s affairs. Taking on the role is Jamie Lee Curtis, iconic star of the long-running Halloween franchise, and such critically acclaimed hits as Trading Places (1983), True Lies (1994), Freaky Friday (2003), and the audacious late-80s ensemble comedy, A Fish Called Wanda (1988). “What drew me to Knives Out was simply that it felt smart, clever and fun,” says Curtis of her initial reaction to the script. “It's a perfect dysfunctional family comedy because there are characters from every generation. I think it’s one of those movies that will be really fun to see with your own dysfunctional family.”

“Jamie is a force of nature,” says Johnson of his decision to cast Curtis in the role. “Since Linda is the eldest daughter, we were really lucky to have Jamie bring that kind of leadership quality. At the same time, she’s funny, warm and deeply intelligent – all the ingredients needed for this character, and I think you feel it all on the screen.”

Curtis’s overall approach to the character was to create a strong woman who is reeling with grief and wrestling with a sense of duty to her father’s legacy. “I felt you could play Linda a thousand different ways,” explains Curtis. “You could definitely play her very arch. But what Rian and I talked about was instead keeping it more real and emotional. He wanted these characters to be very relatable, even if they’re in these crazy and macabre circumstances... Linda has just lost her father so there is a lot of sadness there. But she’s also the eldest sibling, so she feels the pressure to step up and become the new family elder.”

For Curtis, the icing on the Knives Out cake was pairing up for the first time with Don Johnson, here playing her trophy husband, Richard. “I've known Don Johnson for such a long time, and I think we make for a great married couple," she says. “We fell naturally into a very married back-and-forth.” 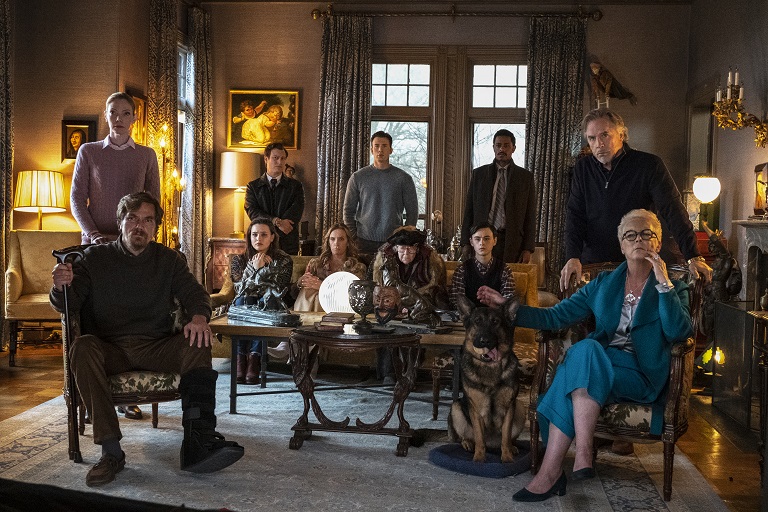 Richard, Linda’s dashing husband, second-in-command at her successful real estate business (and second class citizen in their marriage), has enjoyed the privileges that wealth brings. But while having married into the Thrombeys once seemed full of advantages, Richard now faces some of the downsides – including being a suspect in his father-in-law’s murder.

Portraying Richard is another Hollywood screen veteran in Johnson. Best known for his work on Miami Vice, Johnson has gone on to star in such recent hits as Quentin Tarantino’s

For Johnson, the key draws in signing on to Knives Out were twofold - the calibre of the ensemble itself and getting the chance to play a character he’d never played before, a ‘kept man.’ "I [also] found it truly well-crafted and unlike any whodunnit I’ve ever seen in my life,” says Johnson.  “The other thing that intrigued me is that all the characters have to walk such a delicate edge in this story.  It’s exhilarating territory for actors.”

“The attention to detail on this production was so precise that we all felt like we were actually living inside this unfolding story,” says Johnson of the shoot itself. “It was just a blast to see all these great actors being a little larger-than-life than what you normally see them doing. And Rian was masterful at finding just the right line and holding us all there.”

Says the Director “A lot of us have this distinct vision of him as Sonny Crockett, so it was a highly entertaining surprise to see him leaning into this very smarmy dude and having such a blast with it.” 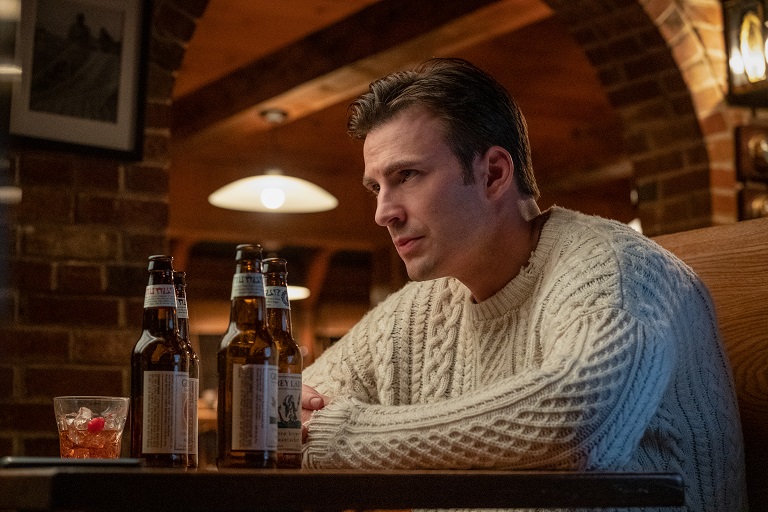 The only son of Linda and Richard, Ransom is an aimless, spoiled, trust fund kid; the defiant black sheep of the family who loves nothing more than calling the clan out on their self-serving hypocrisy.

For Chris Evans, best known as the heroic Captain America, getting the chance to play the film’s sneering bad boy was an offer he couldn’t refuse. “It’s one of those scripts that you burn through -  the type of movie that I like a lot and that I don't think gets made often enough,” says Evans of Johnson’s screenplay. “I typically play magnanimous good guys and leaders, so this was a fun opportunity to play someone who is just out for himself,” says Evans. “It was great to have that chance to stretch.”

“It was fun in the wake of his fantastic Marvel arc to play with how the audience perceives Chris,” says Johnson of Evans’ casting. “You get to see more of his range and how great his acting chops are.”

Evans sees Ransom as a man who’s been born with everything – except a moral compass. “He’s cynical, arrogant and he’s got one of the most dangerous qualities a person can have: He thinks nothing is ever his fault and he always believes he’s the victim. I think it comes from the fact that he feels so much pressure and heavy expectation from his family,” Evans observes. “Ransom handles it by aiming to disappoint people before they can even ask anything of him. And when he arrives at the Thrombey mansion, it’s kind of like a big, dark rain cloud coming in.”

Of course, for Evans, the atmosphere on set was another story altogether. “It turned into one of those film sets where everyone became friends and hung out with each other having a great time.  No one retreated at the end of a scene into their quarters. We were all in it together the whole way.  And that meant that whenever it came time to roll the dice a bit with your performance, you felt comfortable to go for it.”

The widow of Harlan’s deceased son, Joni Thrombey lives in California where she struggles to keep her New Age lifestyle-biz, Flam, afloat. Indeed, due to her dire financial circumstances, Joni and her (unwitting) daughter Meg (Katherine Langford) have grown a little too accustomed to living off big daddy Harlan’s largesse... Yup, say what you will about the purity of this woman’s chakras, she’s as big a suspect as anyone else.

Playing Joni is one of the most versatile actors in film today, Toni Collette. Collette’s films have run the gambit - from Muriel’s Wedding (1994) to The Sixth Sense (1999); from Little Miss Sunshine (2006) to Hereditary (2018).

Indeed, it should come as no surprise that connecting to Joni’s New Age vibe was far from a herculean task for the Aussie actress. “Having lived in LA for a few years, I had plenty to base the character on,” laughs Collette. “But I do think Joni sincerely believes in her business, even if it’s all a ruse. She truly wants to be all about bringing positivity and good energy and trying to help people live their best lives. But much as she wants to believe in all that, when Harlan withdraws his material support her world falls apart.”

Being part of the Knives Out ensemble was also a thrill for Collette. “We were such a diverse, multi-generational group, it was completely fascinating,” she says. “Every person had so much fun with their characters. And I think that was possible because Rian was very trusting and open to improvisation. He allowed the dynamic to really build so we’d all be in a groove together. It was exciting to have a director be so specific, but also loosen the reins enough to let each of us really go for it.”

For Johnson, the sense of appreciation is mutual. “No matter how many times I watched the footage, each time I watched Toni I still caught little things that she did that I didn’t see earlier,” says the director. “She gives that kind of performance always. But to see her lean into comedy like this and portray this hippy-dippy lifestyle guru with a slightly darker side left me in awe.”

Harlan’s youngest son, Walt, who suffers from an ever so slight inferiority complex, had hoped to prove himself to his father (and the world at large), by running the family publishing business. But when his plans for a major expansion are shot down by Harlan's refusal to cooperate, could it possibly have left him contemplating a new career – in murder?

“I have wanted to work with Michael, forever,” says Rian Johnson of Shannon, a two-time Oscar nominee - Revolutionary Road (2008) and Nocturnal Animals (2016) - who recently starred as the menacing Richard Strickland in Guillermo del Toro’s Oscar winning The Shape of Water (2017).  “Every time I see him in anything, he pulls your eye to him like he’s a magnet and you are iron shavings; you can’t not watch him,” says Johnson. “Of course, he usually plays very strong, so the lightness of this role was a fresh challenge... I was excited to see what he would do with a part like Walt, a guy who is the youngest brother in the family and not at all strong.”

For Johnson, Shannon once again delivered the goods, adding unexpected layers to the character. “Michael dove in and he was incredibly funny,” says Johnson. “I did not expect him to be as hilarious as he was – I’m incredibly fortunate to have been able to work with him... It was really inspiring just watching Michael have the time of his life.”

Oh yes, it would certainly appear that detective Benoit Blanc has his work cut out cracking this case!