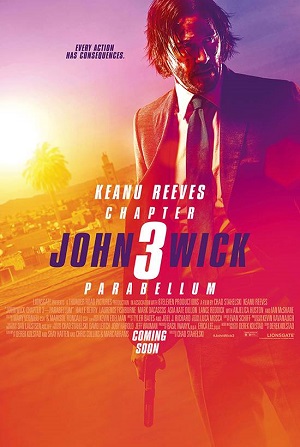 Every action has consequences. John Wick is back with a $14 million price tag on his head

He’s back! The world’s coolest hit-man John Wick returns and we are suitably pumped! In this third instalment of the adrenaline-fueled action franchise, super-assassin John Wick (Keanu Reeves) is on the run for two reasons… he’s being hunted for a global $14 million open contract on his life, and for breaking a central rule: taking a life on Continental Hotel grounds. The victim was a member of the High Table who ordered the open contract. John should have already been executed, except the Continental’s manager, Winston, has given him a one-hour grace period before he’s “Excommunicado” – membership revoked, banned from all services and cut off from other members. John uses the service industry to stay alive as he fights and kills his way out of New York City.

He’s back! The world’s coolest hit-man John Wick returns and we are suitably pumped! In this third instalment

The film’s subtitle ‘Parabellum’ caused a few questions in the online world. First and foremost it is a type of gun but it also derives from a 4th century Roman military quote - 'Si vis pacem, para bellum'. Translated: 'If you want peace, prepare for war.'

More great news for the dog lovers amongst us is that Wick is seen with his beloved pit bull. The trailer showed Wick climbing into a cab with his dog, escaping a New York storm. The destination was the New York Public Library but currently for reasons unknown; surely not a place for a hit?!

Speaking during the preparation of the film, Chad Stahelski was unclear if he would be back to helm the third John Wick big screen outing saying “currently I’m acting as prep director. Hopefully, everything will work out time wise. Of course I would love to… If you really watch the first and second one, there’s only one place it can go — so I’ll let you sort that out.” Well we are delighted to say that Stahelski is indeed back, so the franchise is in safe hands.

Also returning are Ian McShane’s Continental Hotel owner Winston. Speaking to The New York Times recently the British actor has this to say on the film “…(it) will be big and that will be good.” Questioned as to if there will be any retribution for Winston for allowing John Wick to walk free, he replied “Well, the High Table doesn’t like anybody stepping out of line so maybe they’ll take me to task, giving John an out, even. And you’ve got Laurence Fishburne and me, and maybe we get together, maybe we’re unvirtuous. Who knows? Because nothing is the same.”

We welcome back the smoothest concierge in the world – Charon, played by Lance Reddick - and as McShane confirmed the mysterious crime lord and pigeon fancier, the Bowery King played by Laurence Fishburne returns. 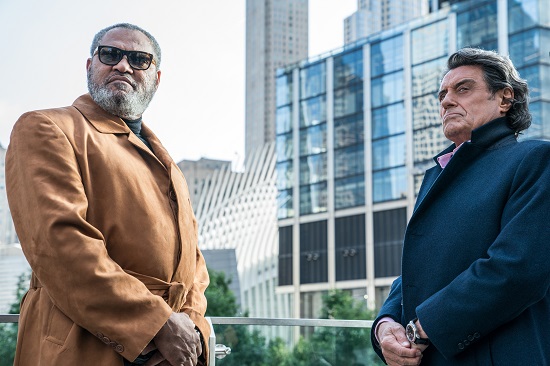 It is not only Wick who loves his dogs. Halle Berry is Sofia, who it would appear is an ally of Wick’s and has two German Shepherds by her side. Joining the Oscar winning Berry is fellow Academy Award winner Anjelica Huston, playing the director of the High Table.

So all the ingredients are there for another high-octane John Wick outing!

John Wick 3 is at Showcase from May 15