Hellboy is back, and he’s on fire! 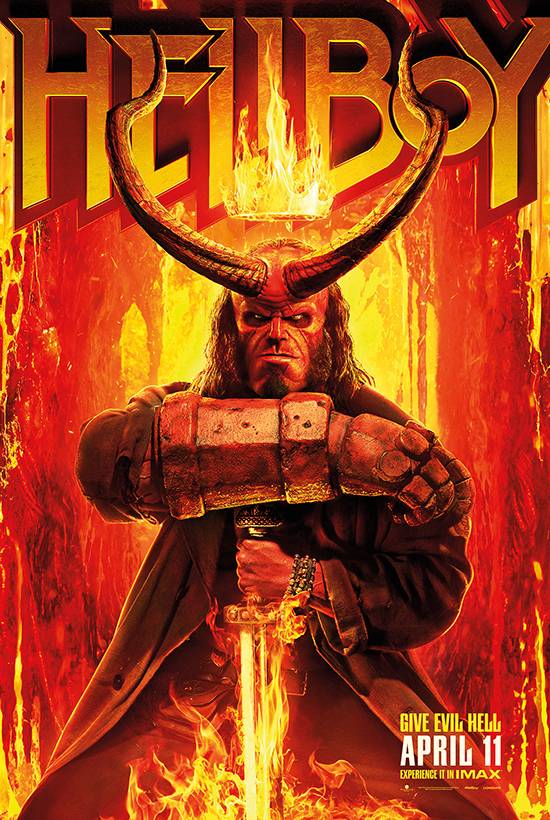 The new action packed story sees the legendary half-demon superhero, Hellboy (played by David Harbour) called to England to battle a trio of rampaging giants. There he discovers The Blood Queen, Nimue (Milla Jovovich, Resident Evil series), a resurrected ancient sorceress thirsting to avenge a past betrayal. Suddenly caught in a clash between the supernatural and the human, Hellboy is now hell-bent on stopping Nimue without triggering the end of the world.

Fifteen years after producing the first feature based on Mike Mignola’s acclaimed Hellboy comic book series, producers Lawrence Gordon and Lloyd Levin knew the time was right to reimagine the film franchise. The landscape of the horror-action-fantasy genre had changed dramatically in the ensuing decade and a half. Recent big-budget comic-book-based titles demonstrated that moviegoers were ready to embrace flawed superheroes (and antiheroes) and edgier, R-rated storylines. “With the success of these we felt there was an opportunity to push the movie in a more mature direction: more graphic, more visceral, more exciting, and thematically, a little more adult. After all, the Hellboy books suggest an R-rating and we wanted to do something a bit more faithful to Mike’s work.”

Excitingly the script is a true collaboration between Mignola and Andrew Cosby. Mignola remained involved in the process throughout, reading each successive draft to ensure the screenwriter stayed true to the character. “It was important for us and for the fans as well, to really stick to the roots and origins of Hellboy,” says producer Les Weldon. “No one wants somebody else’s Hellboy — they want Mike’s. It felt almost like we were doing a biographical or historical movie. Source material is key. We had Mike, and I think it really, really paid off.”

Mignola’s involvement was especially important because while many of the scenes and much of the dialogue comes directly from the comic books, Hellboy is an amalgam of the series’ storylines rather than a direct adaptation of one of the books. “I’ve been doing Hellboy for 23 years,” says the author. “There’s so much material and I’m kind of the only guy who knows how all of the pieces fit together. So, the screenwriter would come to me and say, ‘Here’s a story and here are some pieces, and let’s put them together.’ My job was to say, ‘I see what you’re doing, but I don’t think you fit all of the pieces together quite right,’ or, ‘We need a thread that connects this to this’ or, ‘Instead of this piece, let’s put in this piece.’ In the end it’s taken pieces of so many of my stories and fit them together in a way that really works.” 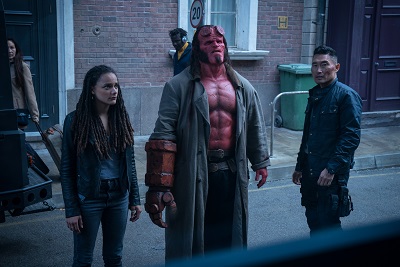 The film also expands the scope of Mignola’s work by bringing Hellboy’s world fully into the 21st century, according to Levin. “Throughout Mike’s stories there is a real sense of the past,” he says. “Even when they’re set in present day there’s kind of a feel of ancient times or a bygone era. Working together with Mike we discussed how to give this film a contemporary feel and a contemporary setting that really grounds it in the now. So in addition to the forests and other primal settings from the comic books, our story takes place in contemporary urban London.”

To fulfil their goal of bringing Hellboy into the present day and giving it a more horror-centric, R-rated sensibility, the producers knew they needed a director with the right mix of serious genre chops and the experience to oversee a production teeming with spectacular characters, interwoven plot-lines and big action set pieces. They were all impressed with the breadth and depth of Neil Marshall’s work, from his deft handling of episodes of blockbuster HBO series ‘Game of Thrones’ and ‘Westworld’ to his feature The Descent (2005), which Levin calls “one of the best horror films of the 21st century.”

“We wanted a director who could handle both horror and action, and also be strong with character — in particular, that dry, near-gallows humour that often comes out of Hellboy,” says Levin. “Our intent was to set this film squarely in our world, rather than have it be fantasy with a capital ‘F.’ Neil’s work very much reflected that.”

Marshall admits he hesitated when he was first approached about directing the next Hellboy film. “My initial response was, ‘Well, that’s somebody else’s terrain, and I really don’t want to step on their turf.’ But after a little time passed it became apparent that the producers wanted to create a new version of the franchise. I said, ‘Great, let’s do it.’”

The director says he felt the weight of responsibility to the franchise’s fans as well as to Mignola and the producers to get it right. “Larry and Lloyd had carried the torch for this for quite some time. So, the question was what could we do that would reinvent it some way that isn’t radically deviating from the source material — and in some ways would be more faithful to the source material? I saw a lot of potential in a darker version. And Mike and everyone else connected with that concept as well, so it was like, ‘Okay, let’s go dark with it.’”

For Marshall, that meant delving into some edgy places with the characters and their stories. “It’s a huge emotional journey for Hellboy, a journey of discovery, and then just literally, we’re going darker: bloodier, more violent. But it’s not a matter of throwing in things that don’t belong. It was always a case of, when in doubt, go back to the source.”

When it came to casting an actor with the depth, humour and sheer physical presence to play the outsized title character, the filmmakers were unanimous in choosing David Harbour.

Marshall had been a fan of the actor’s long before he stepped into his starring role as Police Chief Jim Hopper on the hit Netflix series ‘Stranger Things.’ “He’s been giving amazing performances for many, many years,” says the director. “And it doesn’t hurt that he’s a big, six-foot-three fella with an amazing voice and those eyes that just captivate you immediately. He is a force of nature, and you feel that through the character. So, once his name came into the mix, nobody else was considered. It was like, ‘Of course. He’s so right for it.’” 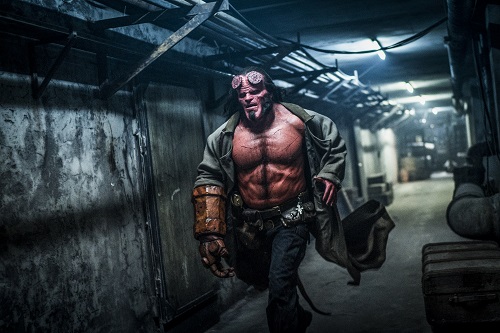 Mignola remembers that before any casting decisions had been made, he and his wife were watching ‘Stranger Things’ together. “The first time David Harbour showed up on screen, Christine said, ‘That guy should be Hellboy.’ I never mentioned that to anybody, but within two weeks I got a call from Lloyd Levin, saying, ‘What would you think about David Harbour for Hellboy?’ So David is literally the only name that came up for this version.”

The actor was on the set of the second season of ‘Stranger Things’ when he got a call from his agents about the role. “It wasn’t completely green-lit yet,” Harbour recalls. “They didn’t have a studio. It was just Lloyd Levin, Larry Gordon, Neil Marshall and a script, but they seemed to be very keen on my doing it.

“I was like, oh, that’s very flattering… and horrifying that you guys would think that I would be this angry demon!” laughs Harbour. “But it seemed to fit. It was a lot darker, a lot scarier than comic-book movies are in general.”

Although he was immediately interested in the role, Harbour says he was nervous about the idea of a reboot. “I hate that term because I have watched a million dudes play Hamlet, and I love everybody’s take on that character,” he explains. “They each bring out something unique. I did not want to try to compete with what the guys on the previous films did with the character. It had to be something totally different. And it had to be something I could excel at as an actor, which would be very different than what Ron [Perlman] did. So the fact that they wanted to bring new life to the project, with a wildly different take on the character, was what made me say, ‘All right. This sounds great. I’m in.’”

Harbour was particularly drawn to the script’s portrayal of Hellboy as a flawed and deeply conflicted character. “I’m not interested in playing a superhero who is always looking to do the right thing,” he says. “I like characters who have motivations that don’t always come out of good places, but might lead to good results. I was drawn to this guy trapped between two worlds.” 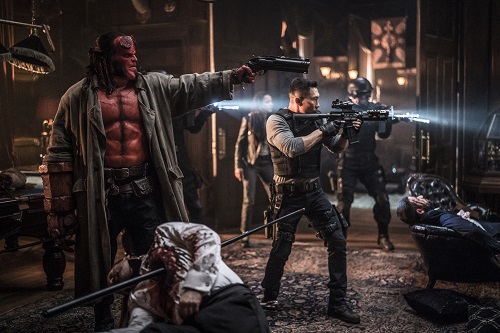 Hellboy’s outcast status was also appealing to the actor. “He’s a freak, a weirdo,” he says. “He’s made fun of, he’s humiliated by human beings, and I can relate to that because I feel like that myself sometimes. I think on some level most of us feel that way. There is no real ‘normal’ in this world. That’s one of the reasons I love Hellboy, and why a lot of fans do too.”

Casting Harbour turned out to be a pivotal creative decision, says Levin, because the actor perfectly captured the version of Hellboy the filmmakers were going for — and then took it to the next level. “Throughout the development process, we tried to make Hellboy more accessible, more grounded, more emotional and empathetic, along with his trademark, deadpan sense of humour,” says Levin. “But I never fully realised what that meant until David stepped into the role. Those ideas flourished well beyond what we initially imagined because he internalises story and character so deeply.”

Hellboy opens at Showcase on April 11