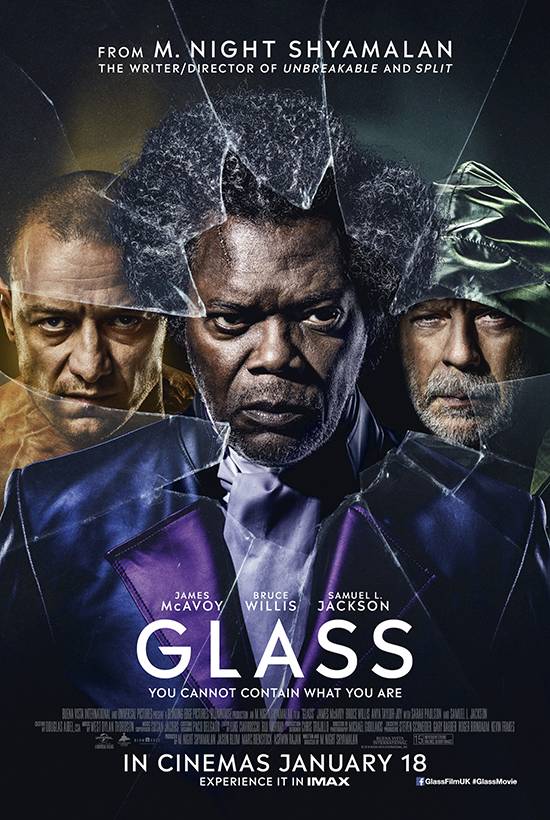 Unbreakable (2000) and Split (2016) unite in Glass, in the new film from writer and director M. Night Shyamalan, which also brings to the screen Bruce Willis, Samuel L. Jackson and James McAvoy in 23 guises!

"I’ll tell you a secret, I want to believe in real-life superheroes.”

So how does Glass fit into the distinct narratives of Unbreakable and Split?

The Unbreakable film series, also referred to as the Eastrail 177 Trilogy, combines elements of both American superhero thriller and psychological horror. All of the films feature David Dunn - the sole survivor aboard Eastrail 177 - and several other characters who are connected to the train derailment of the first movie.

Night Shyamalan brings together the narratives of two of his standout originals--2000's Unbreakable and last year's Split in one explosive, all-new comic-book thriller: Glass. From Unbreakable, Bruce Willis returns as David Dunn as does Samuel L. Jackson as Elijah Price, known also by his pseudonym Mr. Glass. Joining from Split are James McAvoy, reprising his role as Kevin Wendell Crumb and the multiple identities who reside within, and Anya Taylor-Joy as Casey Cooke, the only captive to survive an encounter with The Beast. Following the conclusion of Split, Glass finds Dunn pursuing Crumb's superhuman figure of The Beast in a series of escalating encounters, while the shadowy presence of Price emerges as an orchestrator who holds secrets critical to both men.

What we are promised an epic stand-off within M Night Shyamalan's own cinematic universe! Of course, any film written, produced and directed by M. Night Shyamalan - still best-known for his 1999 breakout film The Sixth Sense - will ensure a huge twist!

Shyamalan has named One Flew Over the Cuckoo's Nest (1975) as one of his favourite films and stated that the Oscar winning film has had a big influence on Glass.

With some mixed critical responses to his films, the writer director was pleased that Split and now the hotly anticipated Glass, described by him as "contained thrillers" have seen hit a "sweet spot where I feel the best, where, for lack of a better metaphor, I can run my best offence. The best version of me can come out where the films are small and the stakes are low and I can try and iterate and take chances. So it’s been good with these movies Split and now Glass it’s been beautiful to really get back to what suits me and going up from there."

It's certainly great to have M. Night back and on form so we look forward to January and the release of Glass. We also hear that James McAvoy will star as 23 characters in Glass, and Shyamalan credits all of them in the end credits. So one thing we take away from that is stick around until the Showcase Cinemas house lights come on - expect the unexpected from M. Night Shyamalan!