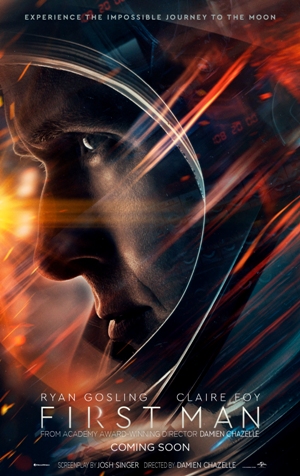 A look at the life of the astronaut, Neil Armstrong, and the legendary space mission that led him to become the first man to walk on the Moon on July 20, 1969.

On the heels of their six-time Academy Award winning smash, La La Land, Oscar winning director Damien Chazelle and star Ryan Gosling reunite for Universal Pictures’ First Man, the riveting story of NASA’s mission to land a man on the moon, focusing on Neil Armstrong and the years 1961-1969.

The film, based on James R Hansen’s book, traces Armstrong’s journey from family tragedy to the moon landing and what the NASA technicians and astronauts endured along the way, exploring the sacrifices and the cost - on Armstrong and on the nation - of one of the most dangerous missions in history. Academy Award winner Josh Singer (Spotlight) has written the adaptation for the screen and credits the help and access he received from Armstrong's family that enabled him to delve into who astronaut was, discovering the “the human as opposed to the icon.”

Speaking in Venice ahead of the premiere, Gosling praised the help and assistance he received in researching the intensely private Armstrong. “I’ve never had more help in my life on a film… Whether it was Neil’s sons or his late ex-wife Janet or Neil’s sister, his childhood friends… NASA opened the door to the facilities. Neil was a very famously introspective quiet humble person so the challenge was to honour that but also to create windows into what he might be or had been experiencing emotionally at the time.”

Gosling also learned a lesson. “I thought what I should do was learn how to fly.” But not too long in, when the instructor told him to take the plane into a controlled stall, “I thought in that moment, ‘This is a terrible idea and there was a reason why Neil Armstrong was destined to be one of the greatest pilots and I’m not.’ In that moment, I realised something about Neil. It’s a certain kind of person that will get into a plane and intentionally push it to its breaking point for the sole purpose of pushing our aeronautics forward.”

For director Damien Chazelle it was growing up with the "iconic images" of the moon landing, which he felt it was "easy to take for granted.” In the following years what was remarkable for Chazelle was the huge achievement and it was trying “to fathom the step-by-step process and what the costs were," which proved to be a challenge. Revisiting this point in history the director explained, “There’s actually a tendency now to take some of these things for granted and forget just how difficult and unlikely and really risky and dangerous and crazy the whole endeavour was.”

Speaking at CinemaCon this April Chazelle told attendees that, "The goal is to bring moviegoers along with Armstrong and the crew of Appollo 11."

It's a ride we cannot wait to take!