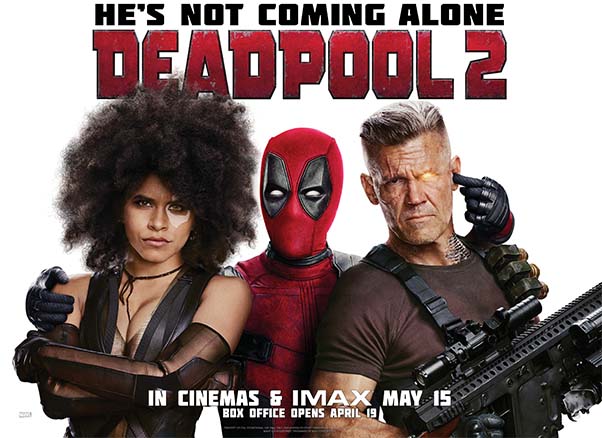 After Deadpool broke out big and then some it is no surprise that we are in for the treat of Ryan Reynolds returning to the big screen as the wise-cracking anti-hero, Wade Wilson - aka Deadpool - in Deadpool 2.

So what do we know about the return?

Well, after surviving a near fatal bovine attack, a disfigured cafeteria chef (Wade Wilson) struggles to fulfil his dream of becoming Mayberry’s hottest bartender while also learning to cope with his lost sense of taste. Searching to regain his spice for life, as well as a flux capacitor, Wade must battle ninjas, the yakuza, and a pack of sexually aggressive canines, as he journeys around the world to discover the importance of family, friendship, and flavour – finding a new taste for adventure and earning the coveted coffee mug title of World’s Best Lover.

David Leitch, hot after directing John Wick and Atomic Blonde, is directing the sequel. A former stunt coordinator (Jason Bourne) Leitch ripped up the rule book with the success of John Wick and recently spoke about his approach to helming Deadpool 2.

“I think you have to pay homage to this movie that's so beloved. Everybody is anticipating it. And I think we have to find a way to make it distinctly our own, and we're doing that. The DNA of Deadpool shouldn't change. He's such a lovable character; we're going to carry that through.”

There was so much to love for Deadpool – the shear glibness and cynicism, Reynolds breaking the fourth wall, but also of course the great action sequences. Leitch co-owns a fight choreography school ‘87Eleven’ with his John Wick co-director Chad Stahelski and recently informed Empire magazine that Deadpool 2 will feature “more action in this film. I hope we can expand it and make it interesting in an 87Eleven kinda way.”

He too was a huge fan of the irreverent tone of the original film and wants to deliver, “on what they did and at the same time hopefully expand the universe.”

So we have a director who is a fan of the world of Deadpool. We know that Ryan Reynolds has the chops, but what of the villain? What can we expect from Cable?

Josh Brolin, after turns in Sicario and Old Boy, and soon to eat up the screen as Thanos in Avengers: Infinity War always delivers a great bad guy, and is to play the villain Cable. Introduced as ‘a badass solider from the future’, Brolin is an ideal fit and certainly has the thumbs up from us here at Showcase. So a badass solider and Deadpool is sure to be one epic face-off!

Deadpool 2 is released in May and we are counting down the days. Any further information we shall be sure to pass on!