Blinded By The Light

Set in 1987, during the austere days of Thatcher’s Britain, Blinded by the Light is a joyous, coming-of-age story about a teenager who learns to live life, understand his family and find his own voice through the words and music of Bruce Springsteen.

Javed is a 16-year-old British Pakistani boy growing up in the industrial city of Luton. Unemployment and the National Front are on the rise and Javed feels trapped; all he dreams of is escaping. He wants what all teenagers want - a girlfriend, the freedom to go to parties - but most of all he wants to be a writer.

Unfortunately, his family have other ideas of how Pakistani boys should behave. They expect Javed to work hard to help the family and give his wages to his Dad, who runs the household. Javed knows his only way to get out of town is to do well at school so he has the chance to leave for university.

On his first day at his new school, Javed runs into a boy in the hall and a cassette tape falls out of the boy’s Walkman - Bruce Springsteen. Javed knows nothing about him but when he first hears Bruce’s music - everything in his life changes. He feels like Bruce is speaking directly to him and understanding everything he thinks and feels. Through exhilarating musical sequences, we see how Javed relates Bruce’s words about feeling trapped in New Jersey to his own life in Luton - Bruce’s lyrics are all about yearning to escape, and suddenly his world is full of hope and possibility. 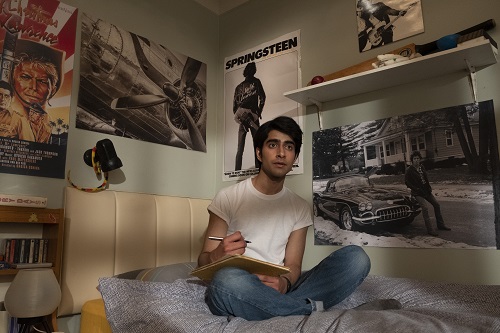 Bruce’s lyrics encourage Javed to find his own writing voice, talk to the girl he’s always fancied, and challenge his Dad’s strict rule over the house.

Blinded by the Light sounds like a fantastic coming of age premise and we were intrigued to learn of its inception from director Gurinder Chadha who developed the screenplay with British journalist Sarfraz Manzoor, from his memoir ‘Greetings from Bury Park.’

The journey to the screen began in earnest back in 2010 when visionary writer-director producer Chadha (Bend It Like Beckham 2002) and author-journalist Manzoor attended the premiere of The Promise (2010), a film charting the making of the 1978 Bruce Springsteen album ‘Darkness on the Edge of Town’.

Chadha said “there on the red carpet an amazing thing happened. We were both poised with our cameras ready to snap pictures of Bruce as he passed us, but Bruce stopped and turned to Sarfraz to say: ‘Your book was really beautiful.’ Sarfraz almost collapsed. Bruce said ‘Someone sent me a copy and I loved it.’

Sarfraz was just blown away. Then I jumped in and said, ‘I’m Gurinder Chadha, the filmmaker, and we really want to make this into a film, but we need your support, Bruce.’ And he said, ‘Sounds good, speak to Jon.’ He pointed to Jon Landau, his long-time manager, along with Barbara Carr and Tracy Nurse, and from there we kept in touch.”

Manzoor continues, “I could see that maybe our story would be about an outsider changing someone at a decisive moment, at 16 or 17 years old.”

“Bruce’s lyrics are very much part of our screenplay and we use his songs in a great narrative way,” Says Chadha. “It’s not at all, ‘Oh, here’s a great hit, let’s put this song here, let’s put that song there,’ it’s not a jukebox film. The song’s lyrics drive the narrative somewhat.

To me it feels like a spiritual companion to Bend It Like Beckham. It shows the careful balances we had to make as teenagers as we fought for what we wanted but without alienating our parents whom we knew just lived for us - their children. It’s a tough subject to find the right balance of emotion, pathos and entertainment. Beckham was 17 years ago and there’s not been a similar film since then.

For me as a film maker I do feel this is a more mature film and I wouldn’t say it’s a sequel, as such, but I would say that you would watch this film and go, ‘Oh, this is a film from the person who made Bend It Like Beckham, for sure. That’s my diaspora sensibility.’’

Viveik Kalra is the young actor tasked with breathing life into the screen Javed.

Chadha said of her leading man, “For someone with such little screen experience, he did an amazing job. To have a solid central performance is critical in any film but especially so in a coming of age film. He does carry it, and also he feels it; he’s been through everything that Javed has been through to some degree. I think he is going to be a very big figure in the British acting landscape one day.” 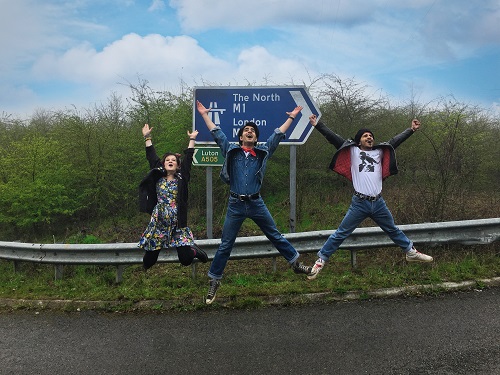 For the pivotal relationship between Javed and the girl of his dreams, Eliza, Chadha has unearthed another gem in Nell Williams.

“She is another great new talent for us. She was 19 at the time of filming, but boy does she have screen presence. She reminds me of a British Jennifer Lawrence.”

With the film in the can the next step was seeking the approval of Bruce Springsteen.

“One of the most enthralling and nerve-wracking experiences of my life was going to New York to show Bruce a cut of the finished film in case he had notes. I sat in the row behind him watching him enjoy the movie. At the end he turned to me and said, ‘Thank you for honouring me so beautifully. Don’t change a thing.’”

Blinded by the Light opens at Showcase Cinemas on August 5