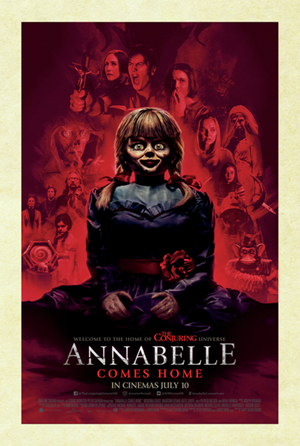 Annabelle is a demonically possessed doll that terrorises a young girl and her friends.

Determined to keep Annabelle from wreaking more havoc, demonologists Ed and Lorraine Warren bring the possessed doll to the locked artefacts room in their home, placing her "safely" behind sacred glass and enlisting a priest's holy blessing. But an unholy night of horror awaits as Annabelle awakens the evil spirits in the room, who all set their sights on a new target - the Warrens' ten-year-old daughter, Judy, and her baby sitter and friends.

Annabelle Comes Home is the third film in the spin off The Conjuring series and Patrick Wilson and Vera Farmiga reprise their roles as Ed and Lorraine Warren. Gary Dauberman is directing the film from a screenplay he wrote, from a story by Dauberman and James Wan, who created the franchise.

The Conjuring universe films have a longstanding tradition of inviting a priest on set to bless the production and Dauberman also invited a priest to bless the Annabelle Comes Home set on November 7, 2018.

Playing the daughter of Wilson and Farmiga’s paranormal investigators is McKenna Grace and she recalled how the priest blessed many from the cast and doused the set in holy water. However despite the best efforts of the priest, unexplained paranormal events still wrought havoc on the set with incidents involving Grace and Wilson, as well as visiting journalists and certain artefacts in the replica of the famed Warren artefact room.

A moving piano bench, uncontrollable nose bleeds and an unexplained loss of power in a production trailer are just a few of the eerie experiences the cast and crew of Annabelle Comes Home had during the shoot.

The piano bench in the artefacts room moved overnight on several occasions, though no crew members were working, and the stage was locked. When a journalist visited set one day, his watch went haywire, with it changing time, speeding up and jumping ahead hours at a time. But when he put it on the next day, the time was accurate and everything was back to normal.

Also during filming, Grace brought a new instant camera to set to take pictures with cast and crew, but every time she snapped a photo with Annabelle in it, the picture came out black. And in a photo with Patrick Wilson, a black mark appeared over the cross he was wearing, obfuscating the holy symbol.

“There’s a lot but I’ll start with a short one: I woke up one morning and I had this weird, small cut near my hairline on my forehead and it was in the shape of a triangle,” Grace told The Wrap. “I was really freaked out, and I got really scared because Gary Dauberman had told me I was abducted by aliens, and I started researching. I literally thought I had gotten abducted by aliens.” A creepy coincidence: while Grace was explaining her experience, she said a car just passed her and it had a picture of an alien on it.

“And I’m just starting with the least scary experience,” she added. “When all of us were on set together for the first time, the lights went out and we were all freaking out and asking, ‘Annabelle, are you there?’ Then, the lights turned back on and my nose was bleeding so heavily. It happens sometimes because of allergies but not this heavy - as soon as I left set to get a tissue, it stopped.”

So in short be prepared for the unexpected when Annabelle Comes Home opens!