Astronaut Roy McBride travels to the outer edges of the solar system to find his father, fellow astronaut Ray Clifford, and unravel a mystery that threatens the survival of our planet. He uncovers secrets which challenge the nature of human existence and our place in the cosmos.
Clifford may be the only one with the knowledge to help save Earth thanks to his experiments with a top secret substance the resulted from “Project Lima,” an initiative to search for extra-terrestrials. The biggest problem McBride faces is tracking his father down since Clifford’s been lost in space for the better part of 16 years.
Brad Pitt plays McBride in search of his father who is played by Tommy Lee Jones and we are very excited to see the two Oscar winners on screen together.
We are also intrigued by the title and a little digging into the memories of our school Latin lessons has revealed that Ad Astra means "to the stars" in Latin. It's often used as a shorthand for ‘Ad Astra per Aspera’, meaning ‘To the stars through difficulties’. 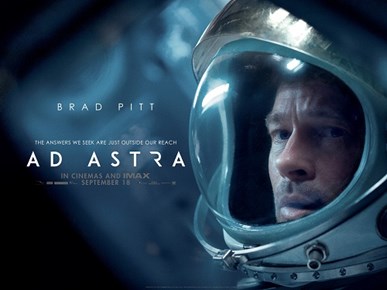 Director James Gray, who also co-wrote the screenplay with Ethan Gross, recently said Ad Astra will feature "the most realistic depiction of space travel that's been put in a movie." He's also described it as "Sorta like, if you got Apocalypse Now (1979) and 2001 (A Space Odyssey (1968)) in a giant mash-up and you put a little (Joseph) Conrad in there."

Gray, whose previous films include Little Odessa (1994), The Yards (2000) and The Lost City of Z (2016), also spoke of his fear of tackling mammoth task of directing Ad Astra.
“I’m terrified by it. The science-fiction genre is so tricky because there are elements of fantasy usually involved, and there are also fantastical elements. What I’m trying to do is the most realistic depiction of space travel that’s been put in a movie and to basically say, ‘Space is awfully hostile to us.’ It’s kind of a Heart of Darkness story about traveling to the outer edge of our solar system. I have a lot of hopes for it but it is certainly ambitious…”
It’s certainly been a long wait for the release of the film. We first heard of Ad Astra when Gray announced that it would be his next film at the Cannes Film Festival way back in 2016. However the trailer had our pulses racing and it certainly looks like it is a case of good things comes to those who wait. Gray has bought in cinematographer Hoyte Van Hoytema who won so much acclaim, and of course an Oscar for his ground-breaking work on Christopher Nolan’s Dunkirk (2017) and the results are simply stunning!
Ad Astra also stars Ruth Negga, Liv Tyler and Donald Sutherland. More news when we have it!