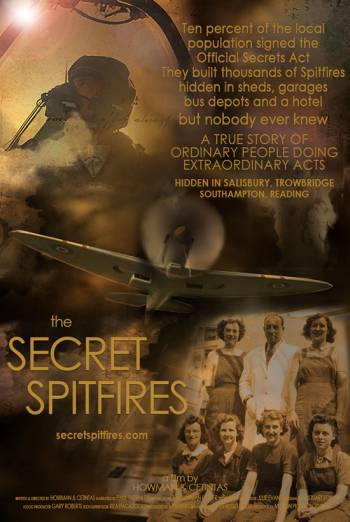 The Secret Spitfires is the story of young girls, boys, women and handful of elderly men who built thousands of Spitfires in secret during WW2. Spitfires were the nemesis of the Luftwaffe and the instrument which halted Hitler's plans for invasion. At a great costs to themselves, Luftwaffe was ordered to destroy the Spitfire factories and upon completing this task, Germans were convinced they had now halted the production of the Spitfires for good. After the destruction of the main factories in Southampton by Luftwaffe, manufacturing of Spitfires were moved to shadow factories in small towns and villages. One such place was Salisbury in Wiltshire. Here, sheds, workshops, garages, bus depots and a local hotel were used to build parts and then assembled to complete aircraft which were then flown out by ATA girls from local fields to awaiting RAF pilots. The film, three years in the making, tells the amazing story of the secret Spitfires through the testaments of the surviving workers and eye witnesses for the very first time. The film contains many unique archive footage and images never seen before.