What We Know About "Underwater"

Seven miles below the ocean’s surface something has awakened.

Disaster strikes below the ocean surface when water crashes through the walls of a drilling station. Led by their captain, the survivors realise that their only hope is to walk across the sea floor to reach the main part of the facility. But they soon find themselves in a fight for their lives when they come under attack from mysterious and deadly creatures that no one has ever seen.

Underwater is directed by former cinematographer William Eubank, who received acclaim for his feature film, The Signal (2014). Eubank was excited by the themes of Brian Duffield (Insurgent (2015)) and Adam Cozad’s (The Legend of Tarzan (2016)) script, the whole survival against the odds, the mysteries beneath the ocean surface and the inherent claustrophobia of the setting. “Our fears of the water and the unknown are so intense,” he says. “The second you’re in the water, you’re out of control. You can’t breathe. It’s totally dark. The deeper you go, the weirder it gets. There could be anything down there.” 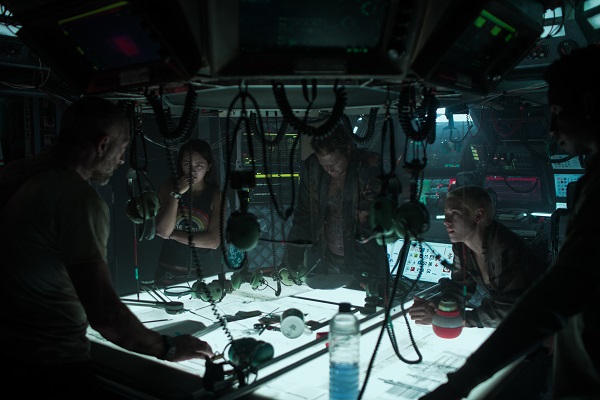 Once the story was established, the filmmakers sought to assemble a stellar team of actors to bring the crew of the Kepler mining operation to life. They began with the lead role of Norah Price, an electrical engineer haunted by her troubled past. “She’s tough, she’s cool, she’s enormously capable and she doesn’t suffer fools,” says producer Tonia Davis of the character. “Norah’s journey of the movie is really going from a place of not being sure about her role in the world to being enormously certain and taking on the mantle of both leader and shepherd for the rest of her crew - and then also facing her own demons and her past, which we discover along the way.”

It was paramount to find a gifted actress who could deliver a nuanced performance while holding her own in breakneck action sequences. From director Eubank’s very first meeting with the producers, there was only one actress he could envision as Norah: Kristen Stewart. “She’s so dramatic, and she’s so charismatic,” says Eubank. “Her face, without her even saying anything, delivers so much. The things that she’s able to do subtly, with just a nuanced facial expression, are incredibly powerful.”

Immediately connected to the role it was Stewart’s idea to shave her head and dye the remaining hair blonde. Although the physicality of the role helped shape Stewart’s performance, her connection with the character was immediate and required little in the way of training or research. “I didn’t have to prepare for the role,” Stewart says. “They’re not soldiers. They’re completely normal people doing a job working somewhere they were told was safe but was not. What she’s good at is fixing screens and tightening screws and making sure the oil rig runs functionally, but she’s definitely not somebody who knows how to survive a situation like this. So, the most preparation I could have done would be to be as present as possible.”

“Norah starts this film completely caught unaware. She’s quite literally caught with her pants down, brushing her teeth in the morning, when the rig explodes. People tend to get emotional or show different colours in trauma, and Norah is closed off, a little emotionally unavailable. In the course of the movie, you find out that she’s in the midst of a pretty intensive grieving process and she really doesn’t think she has anything left to lose. Just when it might be too late, she realises that there’s really never a point where you have nothing to lose. There’s always something to keep fighting for. Life is precious. Then she really finds her feet and becomes a hero.”

Underwater is set to be a nonstop thrill ride only truly experienced on the big screen!