Legendary performer Judy Garland arrives in London in the winter of 1968 to perform a series of sold-out concerts.

It is 30 years since she shot to global stardom in The Wizard of Oz (1939), but if her voice has weakened, its dramatic intensity has only grown. And yet Judy is fragile. After working for 45 of her 47 years, she is exhausted; haunted by memories of a childhood lost to Hollywood; gripped by a desire to be back home with her kids. Will she have the strength to go on? 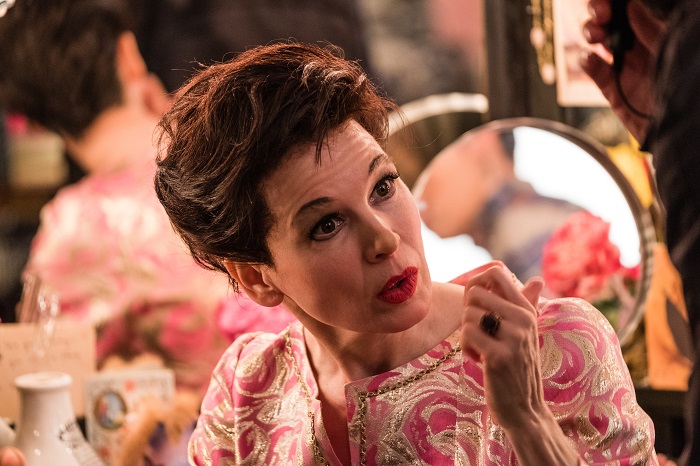 Directed by award winning director Rupert Goold (True Story 2015) and produced by David Livingstone (Pride 2014 and the forthcoming Last Christmas 2019), both director and producer had one person in mind to play Judy at this stage of her life – Renée Zellweger.

“There was no one else who had the ability to sing, act and be comedic in that way. And by good fortune, Renée was the same age as Judy at the time she gave these London shows,” explains Livingstone.

“I’m one of millions and millions through the generations who fell in love with her” says Renée Zellweger of her character.

The film looks at why Judy’s performances took so much out of her. “Most people put on a veneer when they’re in front of a camera or an audience,” says Zellweger, “I think with Judy, you got the real person.”

Despite having previous singing experience in such films as Chicago (2002), training to become Judy Garland was a huge step into the unknown for Zellweger. Immersion in all things Garland was the key. Zellweger adds: “I had many moments in the car when for that whole year Judy was riding shotgun. I listened to her music and her speaking; I researched the stories – the whole thing.” 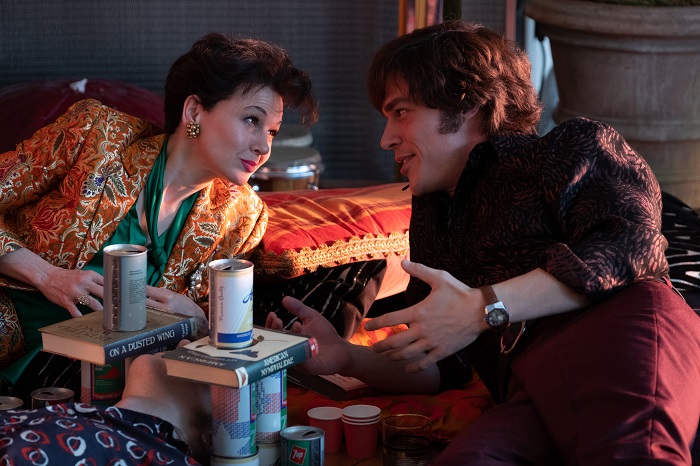 Encapsulating such a singular figure wasn’t just down to the singing – the distinctive accent, tone of voice and movements during the on-stage performance, all had to be mastered. Livingstone always had confidence in Zellweger’s ability on that front: “She’s an actress who can sing rather than a singer who can act. So, I always knew that the acting side of it was going to be fantastic. She trained with a speaking voice coach to get the sound of Judy’s voice and her pronunciation and she worked with a choreographer to get her mannerisms. Judy was quite twitchy in her body movements and Renée’s capturing of that was amazing.”

Rupert Goold was equally impressed by Zellweger’s physical transformation: “One of my favourite parts of her performance is how she holds her shoulders. Judy had this curvature of the spine and it made her look much older and frailer than she really was in the later part of her life. On the first day I thought ‘Oh wow, THIS is a proper actor, this is somebody who is playing a role, not just putting on an outfit’.”

David Livingstone was stunned by the sum of the various parts that added up to Renée Zellweger’s total transformation.

“Renée’s wearing coloured contacts, some – admittedly subtle - prosthetics, and a wig. Her body posture is based on studying Judy over many hours. She’s been listening obsessively to recordings of Judy’s performances to get close to her mannerisms and turns of phrase. It’s an extraordinary transformation.”

“I’ve never been asked to sing several belters in a row, let alone do a live performance anywhere,” explains Zellweger. “I just figured we’d start a year before and work regularly to see if there was any truth to the saying that you really can strengthen your vocal chords like any other muscle. The big thing to remember was that I wasn’t doing an impersonation or trying to emulate this great icon.”

Her director was blown away. “It’s not really till you go ‘action’ on the first day that you know what you’re going to get. I remember my shoulders easing after the first take and going ‘ok she’s brilliant.’”

We can see just how brilliant when Judy opens at Showcase Cinemas on October 4 – we cannot wait.